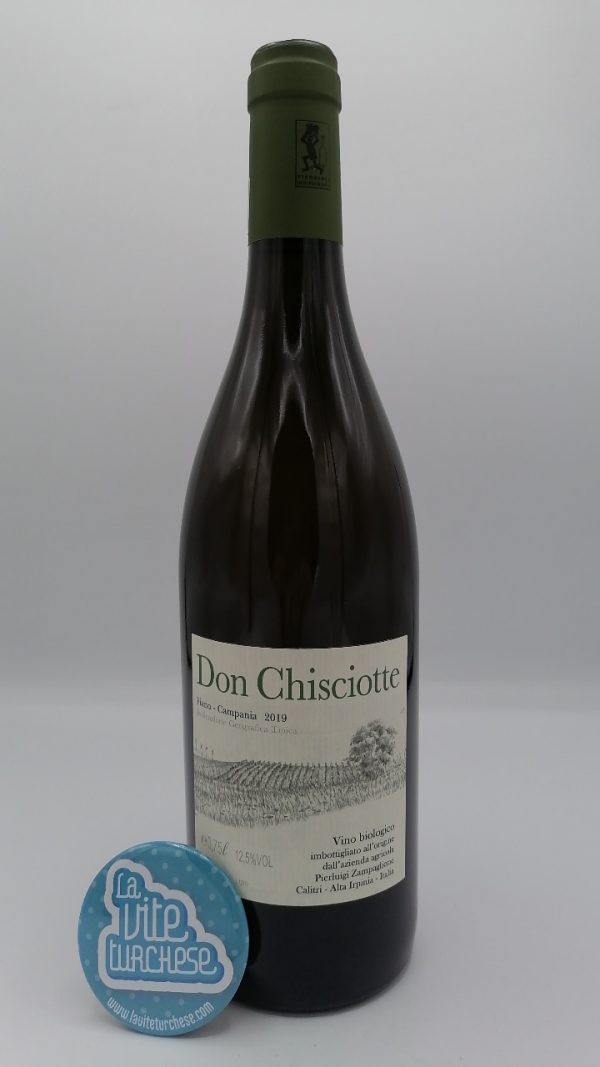 Fiano in the last twenty years has become one of the most important and popular grapes of Southern Italy thanks to the rediscovery of its pleasing qualities by skilled winemakers. The “Don Chisciotte” , the only label produced, is a pure Fiano harvested from 20 years old vineyards at high altitudes on clayey soils where grapes, thanks to the breezy climate, receive a lot of freshness. Harvesting is done by hand, vinification is done in steel tanks with the use of indigenous yeasts and maceration in skins for 10 days. Refinement takes place in the same containers for 12 months, without being filtered and finally 8 months of rest in bottle follow. The result is a wine of heroic energy with fruity and floral aromas of good finesse and depth which ends in a very pleasant sapid texture. Superb!

Productive Notes: fermentation and maceration on the skins for 10 days in stainless steel followed by several months’ refinement in the same container.

Campania has proven in the last years to be a region having an impetuous wine fascination because of its splendid landscapes and the variety of autochthonous grapes it has. It is in this context that Pierluigi Zampaglione’s winery is located, in the upper Irpinia near Calitri, the homeland of one of the most representative grapes of the area: Fiano. Their family activity began in 1990 as grain merchants, however it was only in 2002 that grandson Guido ventured the purchase of 2 hectares of Fiano vines at prohibitive altitudes (800m) which, despite the poor soil and the strong temperature range, was rewarded with wines of unusual power. Theirs is a recent history, marked by the fight against the system which tried to expropriate them of their lands for the construction of windmills for profit, and just like in the famous novel “Don Quixote” the protagonist fights against windmills seen as enemies of nature, they adopted it as a symbol of opposition and triumph in their wine. In this way they preserved an uncontaminated scenario, with an intact and clean ecosystem thanks to the use of organic techniques since the beginning. Vineyards sinking on clayey soils of volcanic origin and an old style mood made of manual works both in the vineyard and in the cellar, represent the basis of their success. An example to be followed and passed on!