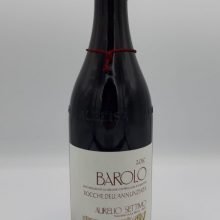 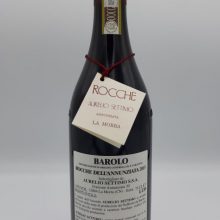 The Aurelio Settimo winery is the typical Langa reality, first of all farmers and then producers. The Settimo family since the early 1940s produced wine, but not only, they also dedicated themselves to orchards and livestock. Things changed in the 1960s with the arrival of Aurelio, who understood the importance and structure of the Nebbioli grown in the Annunziata village of La morra, thus starting to write his name on the Barolo label. The years have passed, and now the company is in the hands of his daughter Tiziana, but the way of working is always the same: absolutely traditional. Their wines are vinified in vitrified cement tanks, long macerations and refinements only in large wooden barrels.
Their Barolo Rocche dell’Annunziata is made in the same vineyard, already considered by the elderly one of the most beautiful and prestigious Cru in the whole Barolo area. An amphitheater totally facing south, perfect for the maturation of Nebbioli. It is a very fragrant wine with a beautiful body with an absurd freshness!!!

Productive Notes:Fermentation in steel tanks with maceration on the skins for 10 days. Refinement of 42 months, of which 18 in large used French oak barrels and 6 in new large Austrian oak barrels.